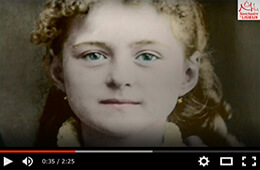 “Thérèse de Lisieux” opens up paths of peace for the world through the values ​​of culture, science and education to which her personality and her work invite.

Father Olivier Ruffray Rector of the Sanctuary of Lisieux

On November 11, 2021, the General Conference of UNESCO Member States validated the registration of Thérèse of Lisieux for the anniversaries with which UNESCO will be associated for the years 2022/2023, on the occasion of the 150e anniversary in 2023, of the birth of Thérèse Martin in Alençon, January 2, 1873.

A young French woman known all over the world, a woman of culture, education and science, Thérèse of Lisieux, through her personality, her work scrutinizes the depths of the human heart and opens possible paths of response to men and women of this world in search of meaning, in search of personal and universal peace.

The recognition by UNESCO of Thérèse of Lisieux on the proposal of France opens new perspectives for the dissemination of her message of life, peace and love to "the most remote islands" as Thérèse of Lisieux expresses it. itself, to the "outskirts", according to the expression of Pope Francis.

Thérèse de Lisieux, for the 150th “anniversary of her birth, is presented by France with the support of Belgium and Italy. Saint Thérèse of Lisieux, mystic (1873–1897) is a nun of the Order of Carmel, doctor of the Catholic Church. She died at the age of 24, and is best known for her posthumous publications, including Story of a Soul.
For UNESCO, the celebration of this anniversary will help to bring greater visibility and justice to women who have promoted the values ​​of peace through their actions. Given the fame of Thérèse de Lisieux in the Catholic community (the city of Lisieux being the second place of pilgrimage in France after Lourdes), the celebration of her birthday can be an opportunity to highlight the role of women in religions. in the fight against poverty and the promotion of inclusion. It can also reinforce UNESCO's message on the importance of culture (poems and written plays) in the promotion of universal values ​​and as a vector of interreligious dialogue.